Saucy sketches go under the hammer 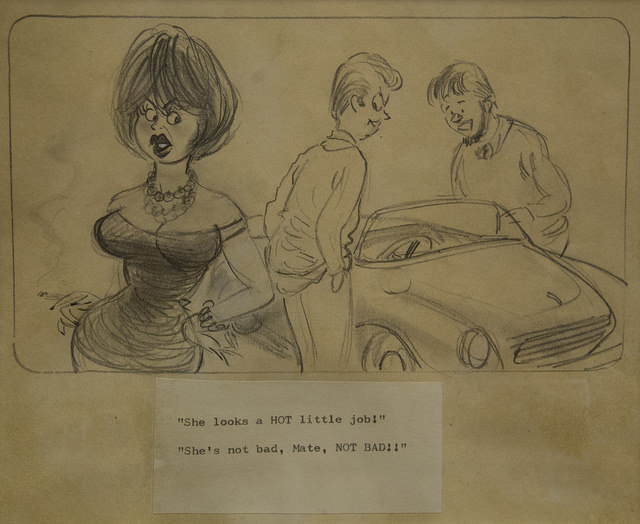 A collection of original sketches by the ‘king of the saucy postcard’ will be going under the hammer at an antiques auction early in the Cotswolds in the new year.

The work of Donald McGill will be familiar to anyone who has ever browsed the postcards at a British seaside resort.

Risqué, witty, and big on the double entendre, the 1950s originals are highly collectable today.

And Cirencester-based auctioneer Moore Allen & Innocent will be selling 18 original sketches by McGill, on which the colourful postcards were based.

Each one is accompanied with a handwritten or typed pun-filled caption, and many are stamped to the rear ‘Blackpool Postcard Censorship Board – Approved’, and signed and dated by the censor.

Yes, those jokes might make us groan now, but back in the 1950s they fell foul of strict morality laws.

As the red-faced policeman said to the curvy blonde driver with the broken taillight in one of McGill’s sketches: “You’ve got no light behind, so I’m afraid I’ll have to pinch you.”

The pencil sketches include immortal jokes like the buxom blonde showing her bloomers as she waters her flowerbed, with one passing man saying to the other “I like her display of pinks, Fred!” or the overweight foreman saying to the diminutive secretary “While you’re in this department, lass, you’ll be working under me.” “By heck – I shan’t half get flattened!” she replies.

Another large collection of pictures – 17 in all – will be sold as a single lot: coloured engravings of the drawing of the Bayeux Tapestry by Charles Stothard.

Stothard was sent to Bayeux by the Society of Antiquaries to make a full-scale drawing of the 11th-century tapestry – whose 230ft of illustrations depict the Norman invasion of Saxon Britain – for publication in the series Vetusta Monumenta.

He made three visits, between 1816 and 1818, and the 17 prints were published in April 1821. He did not have much time to enjoy his fame, though. He was killed after falling from a ladder while tracing a stained glass window at Bere Ferrers church in Devon in May of that year.

And on the subject of 19th century copies of great art, paintings purporting to be by Rembrandt have been coming into the auction house ever since the firm sold an undiscovered self portrait by the Old Master in 2007 for £2.2m.

This framed oil painting is a copy of the 1655 self portrait which hangs in Kunsthistorisches Gallery in Vienna.

“This is a good 19th century copy, unless we have the original and they have the copy,” quipped auctioneer Philip Allwood, “in which case, ours will make considerably more than the £200 to £300 estimate I’ve put on it.”

The auction will be held on Friday, January 9 from 9.30am. For a full auction catalogue, log on to www.mooreallen.co.uk